The Technological Entrepreneurship Program provides graduates of engineering or science undergraduate programs with the unique multidisciplinary knowledge in engineering, business, and management as well as the systemic views, tools, and methods that will enable them to become entrepreneurs and/or managers who can:

integrate into an
evolving technological enterprise

This multidisciplinary program provides students with cutting-edge engineering, business management, and marketing knowledge and tools that enable them, during their studies, to develop technological ventures in their workplaces. Program graduates are qualified to address all aspects of successful technological entrepreneurships - from the idea stage, through the business strategy formulation, and finally to the marketing of the new or improved technological process, product, or service. 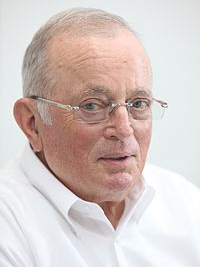 In 1999, Uzi Wexler z"l initiated and founded the Azrieli College of Engineering in Jerusalem in order to train skilled personnel in the fields of industry in Jerusalem. He served voluntarily as president of the college until 2012. He then served as chairman of the board of directors and vice chairman of the board of trustees, a position he held until the day he passed away (June 19, 2017).

While Uzi contributed greatly to the city of Jerusalem, he wrote the following in his book. "When asked what the most important thing I did in Jerusalem, I have no hesitation. It is true that everyone is important. It is true that I invested thought, efforts, often also wars…. Yes I declare wholeheartedly that the most important thing I have done in Jerusalem is the Azrieli College of Engineering. There I did not deal with measurements and stones. There it is about people."